Notes & Quotes from the debate “How to revive the labour market and avoid a North-South confrontation?” 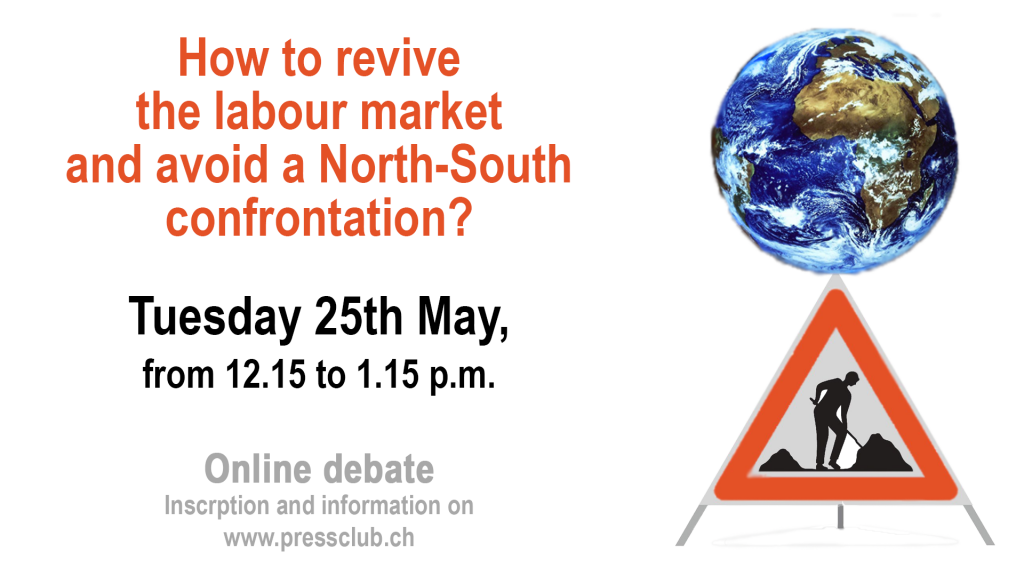 Notes & Quotes from the debate “How to revive the labour market and avoid a North-South confrontation?”

On the eve of the 109th session of the International Labour Conference which will be held virtually in Geneva, from 3rd to 19th June 2021, the International Labour Organization (ILO) will publish, on 2nd June, a new edition of its World Employment and Social Outlook: Trends 2021 (WESO Trends), which looks at the effects of the COVID-19 pandemic on the global labour market and the prospects for recovery. It covers the extent and consequences of the labour market disruption caused by the crisis, including the effects on inequality, working poverty and youth employment. It also outlines principles for a comprehensive and human-centred recovery strategy.

How can we revive the labour market and avoid a confrontation between the countries of the North and the South? Three eminent experts have accepted to answer these questions during a debate organised online by the Swiss Press Club, on 25th May.

Mr Richard Samans, Director of the Research Department of the ILO

“In these areas: worker protections, investment and worker capabilities, investments in worker transition, we are seeing a large unmet demand for employment and inefficiency in matching workers to opportunities, in part because of poor labour active market policies and institutional capability in that regard to help people find new jobs as well as just inattention to these longerterm skilling needs of our young population”

Mr Richard Samans, Director of the Research Department of the ILO

“The primer discussion of the coming ILO Conference will be of the pandemic and its effect on the world of work, the appropriateness and the level of commitment behind accelerating implementation of the Centenary Declaration, which has focus in these areas of policy, can help countries have as broader base recovery as possible. This is intended to be the focus for the next couple of weeks”.

Mr Richard Kozul-Wright, Director of the division on Globalization and Development Strategies at UNCTAD

“What we really need from politics is in the advanced economies. That is essentially where the problem lies. The simple explanation why you have a crisis in the northern labour market is either because of increase trade, competition in low wage economies outsourcing, offshoring that goes along with that. Or technology”

Mr Richard Kozul-Wright, Director of the division on Globalization and Development Strategies at UNCTAD

“Most of the stories when it comes from trade versus technology, ultimately are reduced to a China story. So, the problem for the West is that China has become economically and politically too powerful and that has all the negative repercussions in Northern labour market. It is simply not true! The problem of advanced economies is a set of policies and a growth dynamic based around finance and increasingly monopolised markets”.

“One of the things that we have been tracking is how jobs are changing in the current context. That has been in parallel with understanding how that will impact gender parity. Are we prepared to face this challenge? “

“What we have sadly seen in the context of the current pandemic is that existing inequalities have been hit harder along those fracture lines. We have seen further split and a divergence between those who are already probably not in a very good situation and this has gone worse. One aspect that we have pointed out in our World Gender Gap Report was how much we have seen a point back in gender parity”.