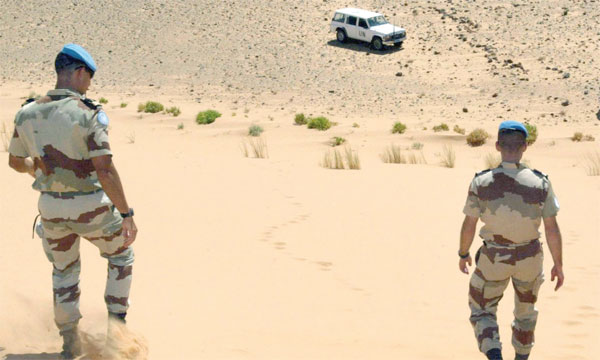 Online (on Zoom) and in person (upon presentation of Covid certificate)

Simultaneous interpretation will be available online
on Zoom for the following languages:
Arabic / French / English / Spanish

And the testimony of several Sahrawi victims

Thirty years after the deployment of the United Nations Mission for the Referendum in Western Sahara (MINURSO), the Saharawi people are still waiting to be able to freely exercise their right to self-determination and independence, in accordance with resolution 1514 (XV) by which the UN General Assembly adopted the Declaration on the Granting of Independence to Colonial Countries and Peoples.

The prolonged occupation and illegal annexation of most of the Non-Self-Governing Territory of Western Sahara by the Kingdom of Morocco is the cause of serious systematic violations of the human rights of the Sahrawi people and of norms of international humanitarian law, often documented by UN human rights mechanisms.

With the breakdown of the ceasefire and the resumption of the armed conflict on 13 November 2020, the repression against Sahrawi human rights defenders, journalists and political prisoners by the Moroccan occupation forces has intensified.

Human rights defenders and journalists are subjected to constant threats, ill-treatment, torture and rape, as well as arbitrary arrests, detentions and house arrests, while political prisoners are kept hundreds of kilometres away from their families, deprived of visits and medical assistance, put in solitary confinement and housed with common law prisoners, some infected with Covid-19.

The 300 member organisations of the Geneva Support Group for the Protection and Promotion of Human Rights in Western Sahara want to draw the attention of the international community to the grave situation of the Sahrawi people who have been waiting since 1966 for the organisation of a referendum on self-determination and call for the effective protection of human rights defenders, journalists and political prisoners.
More information on :  http://www.genevaforwesternsahara.org

Registration to the event
(in person, presentation of the covid certificate)

UAE’s Review by the UN Committee Against Torture

Killing of Al Jazeera’s reporter Shireen Abu Akleh. WHO WILL END THE IMPUNITY?