Notes & Quotes from the debate “Is multilateralism back in Geneva thanks to President Biden? 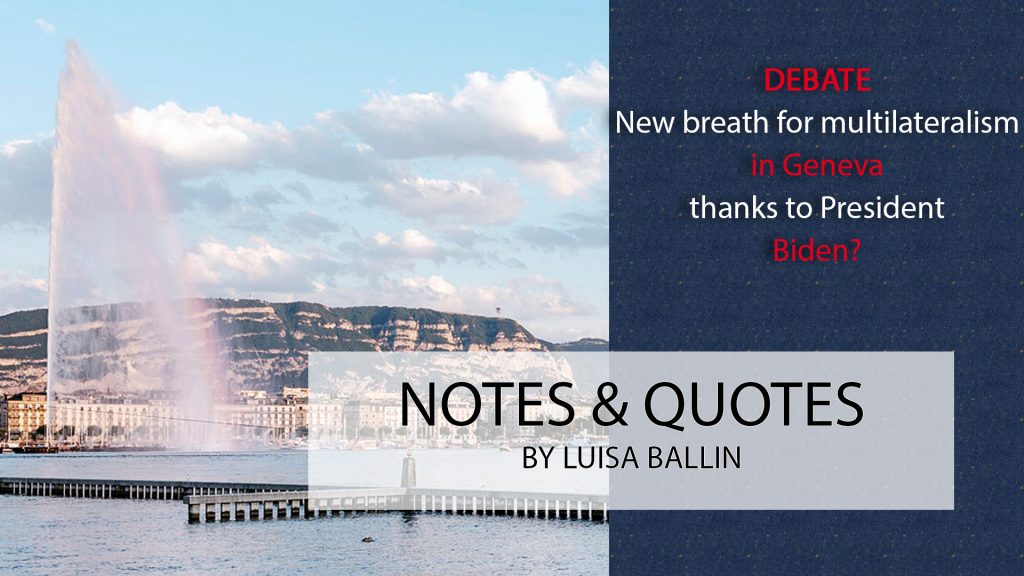 Notes & Quotes from the debate “Is multilateralism back in Geneva thanks to President Biden?

International relations have gone through difficult moments and tensions in recent years. Geopolitical interests have often been the priorities of States in different regions of the world. Since the beginning of the year, there is a wind of change in International Geneva. WTO has a new director general, the Human Rights Council is on a new track, WHO is stronger. All of these changes were implemented thanks to the new US administration. But many questions are still opened: are we really watching a comeback to multilateralism?

These are exiting times! Change brings new opportunities, possibilities for reengagement, building partnership and try to find creative solutions especially in Geneva where there is a lot to do.

You have heard from the Secretary of State and I have made a statement here in Geneva that we take our role very seriously as a member of the Human Rights community and as a participant in the Human Rights Council in term of engagement and self-reflexion. We look at this with humility. We recognize that there are very serious challenges that we face domestically dealing with racism. And this is something that the Biden administration has put front in the agenda to make sure that we, domestically, can address these genuine challenges that we have with discrimination in United States. But we also bring this conversation in Geneva. Most recently, we have partnered with the African Group and many other countries around the Council. We are going to issue a joint statement on racism. It is taking a sort of fresh look at how we can address these issues collectively. It is something that I hope others will see as an example.

We are very happy that US is back…Our Special Envoy, Mr. Borrell has developed an agenda for an EU-US cooperation for change that has four pillars: one is on the green leadership, the second is on the health issue and the Covid response, the third is on trade and technology, and the last one is on global action and security. These are four fields where we think there is a need for a strong EU and US leadership in the international system because the system needs to deliver, needs to give answers to the populations that are willing demands for answers. But we need to be sure that the values are preserved and are at the core of this system.

I do not think, and it was clear, from the meeting we had with Mark Cassayre and the EU ambassadors, that it will put us in the shadow of the US. We have to build up on this other strength. It is also the goals and priority of the European Union to build up on our own autonomy, our own strength. Because we can only be an interesting partner also for the United States when we have this autonomy and this strength on which we can further build and team up together in order to defend better all the values and interest that we all share.

Mr. Walter Stevens, Ambassador of the European Union in Geneva

The US has always played an important role in the context of the multilateral trade cooperation. At the end of the Second World War, the United States has plaid a crucial role in establishing the new economic order, among which, the GATT (General Agreement on Tariffs and Trade), that became the WTO in 1995. Something is clear at the WTO: the US leadership is absolutely decisive. You will never be able to complete a multilateral negotiation without strong US leadership. I would not say it is not a sufficient condition but it is a necessary condition.

This is a sensitive issue: There has been a lot of tariffs that have been imposed over the last four years by the United States but also in retaliation of the United States tariffs by other States. This is not a satisfactory solution, clearly. And we hope that solutions will be found. Discussions are going on in the United States on these tariffs. It is not only tariffs that are targeting experts from China, but are targeting experts from the European Union, including Switzerland – which is not member of the European Union – but some of our products are targeted by these tariffs and there are a number of disputes under way. Probably the best way to sort out all this will be to find mutually agreeable solutions, acceptable solutions.

Mr. Didier Chambovey, Ambassador, Head of the Swiss Mission in Geneva at WTO and EFTA

The end of January has opened a new space for hope. That is a positive sign. On the other hand, probably in the context of multilateralism, the notion that we are not going back to the world of before is apt and we should be very much on our toes, together, collectively, on our interdependence. This is what has come out from our discussion here: trying to anticipate a redefinition of multilateralism, taking opportunity of this breathing space, this new life that has been brought into multilateralism to really find it, even before we are put in front of another set of obstacles, because we are likely to have other obstacles ahead, taking a new form of collective leadership to take the issues that were there before and solve them.

I would like to underscore and go back on the point of trade and sustainability. One of the angle where multilateralism may be able to reinvest in the dynamic that is going more at the crossroads between civil society, consumers, investors and economic producers, – it is true for the environment – is that we have seen that a mix of transformation in all those categories of stakeholders is really pushing for finance for climate change, integration of environmental issues in our consumption, decisions in our production, value change in a lot of companies. All this is facilitating the work of international organisations.

Ms. Marie-Laure Salles, Director of The Graduate Institute in Geneva.