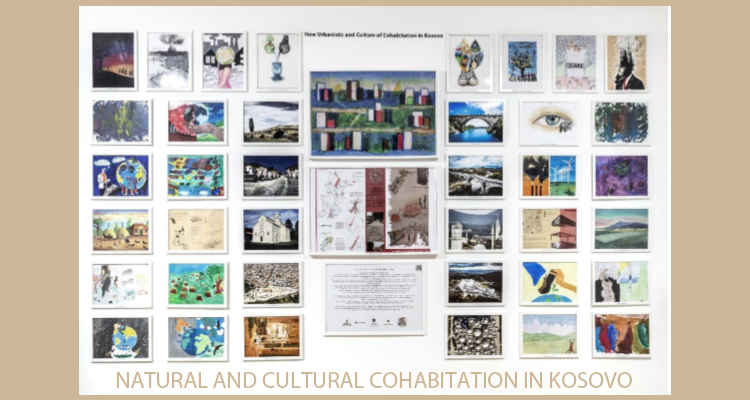 The exhibition “Natural and cultural cohabitation in Kosovo” will be presented on Wednesday, 12 June 2019 at the Swiss Press Club in Geneva.

The cultural event is co-organized by Ibrahim Kodra Swiss Foundation and the Consulate General of the Republic of Kosovo in Geneva.

The exhibition is a result of the cooperation between the Ministry of Foreign Affairs of Kosovo, the Consulate General of Kosovo in Geneva and Ibrahim Kodra Swiss Foundation.

Ibrahim Kodra Swiss Foundation was founded in Lugano with the aim of transmitting the European artist Ibrahim Kodra’s message of art as an instrument for peace and culture and as a common thread of bringing various peoples together. In collaboration with institutions in Albania, Kosovo, Italy and others, the Foundation supports and develops cultural, social and educational projects, promoting cultural exchange between Switzerland, Kosovo and various countries of the world.

The project is the combination of different points. The core of the installation is the artwork “New City” of Kodra, surrounded by images from the national photographic contest about cultural heritage organized by the Ministry of Foreign Affairs and the National Museum of Kosovo in Prishtina and by pictures of young children educated by sustainable practices – new ideas about environmental cohabitation and how they see this future in the world. These works were created during workshop “Art Ecological Project” at National Museum of Kosovo, in collaboration with SOS Children’s Villages Kosovo with National Association of Autism in Kosovo, as well as pictures from the “Adem Kastrati” Art School in Gjilan, and different communities, including Roma, Bosnian, Turkish and Serbian communities.

The exhibition reflects natural and cultural cohabitation in Kosovo, inspired by the UN sustainable development goals, such as “Sustainable Cities And Communities, “Climate Action” And “Good Health And Well-Being.” Choosing mid-June for this very exhibition not only coincides with the International Children’s Day (1 June) and Autistic Pride Day (18 June) but it is based in the spirit of the UN World Environment Day marked last week (5 June) to encourage worldwide awareness and action to protect our environment and beat air pollution as a main theme of this year.

The project, inizially called “New Urbanistic and Culture of Cohabitation in Kosovo”, started its journey at Palazzo Mora during the collateral event “Time, Space, Existence” of Biennale of Architecture in Venice 2018 for six months thanks to the European Cultural Centre and GAA Foundation. The exposition was about sustainability of architecture and cohabitation with culture in Kosovo.

Then, on January 16, 2019 “Natural and cultural cohabitation in Kosovo” was exposed in European Parliament in Strasbourg. The cultural event in Strasbourg was co-organized by Ilhan Kyuchyuk (Member of the European Parliament) and the Embassy of Kosovo in Brussels, thanks to the cooperation between the Ministry of Foreign Affairs of Kosovo, the Embassy of the Republic of Kosovo in Brussels and Ibrahim Kodra Swiss Foundation.

On February 1st, 2019, the project was presented at the Embassy of Kosovo in Bern. Then on 1st of June on the occasion of the International Children’s Day was organized the workshop “Art Ecological Project” with artist Alex Doll at Centro d’Arte Ibrahim Kodra with patronage of Municipality of Melide.

The concept of project is created and finalized by Ibrahim Kodra Swiss Foundation’s team.