The Red Sea, the last « refuge » for corals on Earth

The Red Sea, the last « refuge » for corals on Earth: a first transnational scientific expedition to be launched from Aqaba in June 2021

Lausanne/Seville, 22 April 2021 – The Transnational Red Sea Center (TRSC) will launch its first expedition bridging science and diplomacy for the future of the Red Sea corals at the end of June 2021 from Aqaba, Jordan, on the occasion of an official event that will bring together the highest authorities of the Hashemite kingdom and Swiss Confederation.

This first expedition will mark the kick-off of the activities of the TRSC, created at the Swiss Federal Institute of Technology in Lausanne (EPFL) in 2019 with the support of the Swiss Confederation, which has made it one of the official axes of its « scientific diplomacy » in the Middle-East. It will last three months from July to September aboard the Swiss sailboat « Fleur de Passion » and will involve several researchers, both from the Red Sea countries and from international marine institutions.

Capitalizing on Switzerland’s neutrality, its long tradition of promoting dialogue and EPFL’s reputation for scientific excellence, the Transnational Red Sea Center aims to promote a regional approach to the research and preservation of what is de facto the last “refuge” for corals in the world.

Over the past 30 years, 50% of corals have disappeared worldwide due to global warming, pollution, and other destructive human activities, and only 10% are expected to survive past 2050.

But there is a real hope for the survival of at least one major coral reef ecosystem. Recent studies involving scientists from the Ecole Polytechnique Fédérale in Lausanne (EPFL) have shown that corals in the Red Sea are extremely resistant to rising water temperatures because of their unique genetical characteristics. Their survival is therefore possible, provided that the environmental pressure exerted by human activity in the eight countries bordering the Red Sea is mitigated (Egypt, Eritrea, Israel, Jordan, Saudi Arabia, Sudan, Yemen).

The upcoming launch of this first expedition season was announced from Seville on this World Earth Day at an event organized symbolically in partnership with the Swiss embassy for Spain and Andorra, and the Three Cultures Foundation, whose mission is “to promote dialogue, peace and tolerance among peoples and cultures of the Mediterranean”. 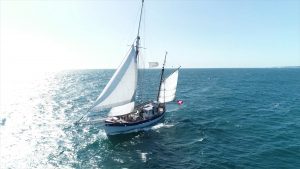 Fleur de Passion will be a link between Switzerland, itself a melting pot of several cultures, and the Red Sea, a region also rich in many cultures. She will leave Seville on April 25 for Aqaba. The logistics platform for this series of expeditions, the 33-meter sailboat of the Fondation Pacifique will also be the flagship of the Transnational Red Sea Center in terms of awareness of conservation issues.

« We are very happy to announce from Seville and the Three Cultures Foundation the upcoming launch of this first season of expedition, which will be officially launched in Aqaba in June », enthusiastically says Prof. Anders Meibom, head of the Biological Geochemistry Laboratory at EPFL, initiator and lynchpin of the TRSC.

« Symbolically, it is important to send a clear message not only on the scientific and environmental goals which are at the heart of the Transnational Red Sea Center, but also on the spirit of harmony which guides our action,«  continues Prof Meibom, one of the authors of the recent studies which revealed the extreme resistance of corals in the northern Red Sea to climate change.

“Preserving the Red Sea as the last refuge for corals on Earth requires working together across all borders: national, linguistic, religious or otherwise. For the sake of the common good not only on a regional, but global scale,«  the researcher insists. 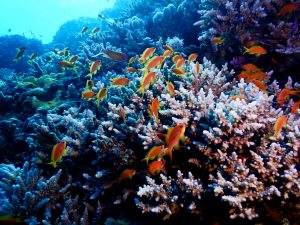 “The kick-off of the expedition from Aqaba in June is another great source of satisfaction and a very positive sign that coral issues in the Red Sea are receiving increasing attention in the region, and beyond in the world in general,“ the researcher adds, himself of Danish origin.

« EPFL is particularly proud to contribute to a Swiss initiative in favor of the corals of the Red Sea and, beyond that, to the future of a region of the world rich in symbols,«  welcomes Martin Vetterli, president of the EPFL.

« The vision to bridge science and diplomacy speaks volume for the academic excellence of our institution as well as its ambition to play a major, and innovative role on an international scale. It also illustrates EPFL’s constant concern to be a key player in the challenges of our time, in particular environmental issues,” Mr. Vetterli adds.

“It is important that this first expedition can take place, EPFL wishes to put its research at the service of the scientific community and decision-makers in the region. Scientific diplomacy is an increasingly important instrument that Switzerland must continue to develop,” says Federal Councilor Ignazio Cassis, Head of the Federal Department of Foreign Affairs (FDFA), which officially supports the project.

“For the Three Cultures Foundation, it is an immense honor that the Transnational Center of the Red Sea and the Swiss Embassy for Spain and Andorra have wished to associate us with this project aiming to the safeguard of a natural heritage as important as the corals,” says Concha de Santa Ana, executive director of the Seville-based organization.

« We have already had the pleasure of working with the Swiss sailboat Fleur de Passion in the past (note: when she returned from her four-year trip around the world in September 2019) but this year, given the particular importance of this new expedition, we wanted to give a new significance to our presence in the project by hosting a conference by Prof. Anders Meibom,” continues the manager.

“For our foundation, this is an expedition of great symbolic value since the sailboat will leave Seville to cross the Mediterranean and reach the heart of the Arab world,” adds Concha de Santa Ana.

In total, the Transnational Red Sea Center plans four expeditions each summer from 2021 to 2024 along the approximately 4,000 km of the Red Sea coasts.

Press release and press kit in English, French and Spanish,

photos and video free of rights on www.trsc.org