The Arab Gulf Programme for Development (AGFUND) has finalized the arrangements for the Prize Committee Meeting to select the winners of Prince Talal International Prize for Human Development. 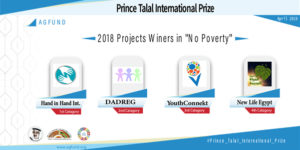 The Committee has met in Geneva, Switzerland, on Monday, April 29, 2019, to select the winning projects out of the 166 projects nominated from 78 countries that competed for the Prize in the field of « No Poverty », the first goal of the Sustainable Development Agenda 2030. The nominations that met the Prize conditions were evaluated by specialized experts in the field. The Prize Committee will select the winning project in each of the four categories of the prize from the top five evaluated as worthy recipients of the Prize.

AGFUND invited the UNOG accredited Journalists to attend a press conference was held right after the Committee Meeting to announce the winners and the new prize subject for 2019.

Mr. Nasser Alkahtani, Executive Director of AGFUND, said that AGFUND’s Board of Directors has decided to rename AGFUND Prize after the late Prince Talal bin Abdul Aziz Al Saud, founder of AGFUND, in recognition of his great efforts and dedication to humanity and development where the new name is « Prince Talal International Prize for Human Development ». Alkahtani confirmed that the Prize will continue to follow the same mechanism and criteria and will be in compliance to the sustainable development agenda 2030. The annual subject selected of the prize will be one of the 17 SDGs.